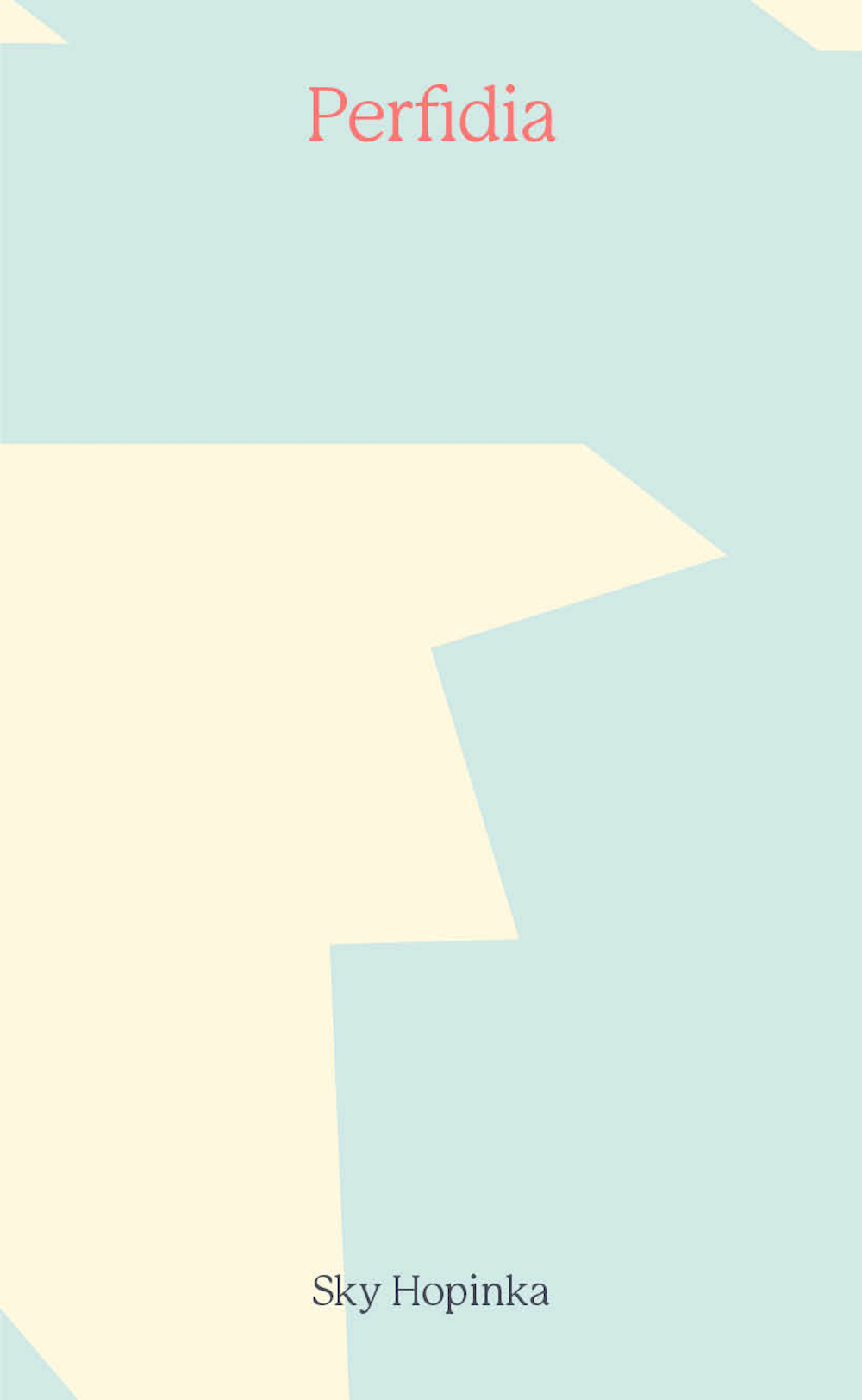 Temporarily out of stock
Email publishing@wendyssubway.com to place an order

Sky Hopinka's Perfidia moves within the textured landscape of memory, both personal and collective, to address the founding colonial violence of the United States and its lasting impact. In a series of cantos, the book-length poem surfaces a first-person narrative amidst the stream of history and its accounting through the voices of ancestors and kin. Shifting registers between the embodied and the spiritual, Perfidia's subjective syntax destabilizes entrenched colonial perspectives and concomitant descriptions of land, sky, sea, myth, place, and personhood.

Perfidia sits at the center of Hopinka's most recent body of filmic work, which draws from the poem's sixteen cantos and its previous iterations. These filmic works include the short film Lore (2019), the 2-channel video installation Cloudless Blue Egress of Summer (2019), the feature-length film maɬni (2020), and the photo series The Land Describes Itself (2019).

Perfidia is published on the occasion of Hopinka’s solo exhibition Centers of Somewhere at the Center for Curatorial Studies, Bard College (October 17, 2020 – February 14, 2021). The publication features a foreword by CCS Bard Director of Graduate Programs and Chief Curator, Lauren Cornell, and an introduction by Los Angeles-based curator and critic, Julie Niemi, who initiated the project with Hopinka in Milwaukee, Wisconsin in 2019. Perfidia is co-published by the Center for Curatorial Studies at Bard College.

Perfidia assumes a captivating rhetorical style that I most often associate with ancient oral texts. A literal chamber is being sounded out in order to surround and protect the reader. Hopinka's blotted and beautifully fogged over images only enhance this sense of interconnection. As in the best serial poems we are witness to a poet locked in the grip of dictation. Books are referred to as objects all too often but in this case it's the glaring, vibrant, interlocking truth.
—Cedar Sigo

Sky Hopinka’s Perfidia is a recording of the brief encounters, the brief moments, the brief emotions we walk/breathe/live past without noticing. “Me and you and I and we wandering in wounded realms” Hopinka writes, and with each written word, what is separate, become one.
—Javier Zamora

Sky Hopinka (Ho-Chunk Nation/Pechanga Band of Luiseño Indians) was born and raised in Ferndale, Washington and spent a number of years in Palm Springs and Riverside, California; Portland, Oregon; and Milwaukee, Wisconsin. In Portland he studied and taught chinuk wawa, a language indigenous to the Lower Columbia River Basin. His video, photo, and text work centers around personal positions of Indigenous homeland and landscape, designs of language as containers of culture expressed through personal, documentary, and nonfiction forms of media. He received his BA from Portland State University in Liberal Arts and his MFA in Film, Video, Animation, and New Genres from the University of Wisconsin-Milwaukee.

His work has played at various festivals including ImagineNATIVE Media + Arts Festival, Images, Wavelengths, Ann Arbor Film Festival, Sundance, and Projections. His work was a part of the 2016 Wisconsin Triennial and the 2017 Whitney Biennial and the 2018 FRONT Triennial. He was a guest curator at the 2019 Whitney Biennial and was a part of Cosmopolis #2 at the Centre Pompidou. He was awarded jury prizes at the Onion City Film Festival, the More with Less Award at the 2016 Images Festival, the Tom Berman Award for Most Promising Filmmaker at the 54th Ann Arbor Film Festival, the New Cinema Award at the Berwick Film and Media Arts Festival and the Mary L. Nohl Fund Fellowship for Individual Artists in the Emerging Artist category for 2018. He was a fellow at the Radcliffe Institute for Advanced Study at Harvard University in 2018- 2019, a Sundance Art of Nonfiction Fellow for 2019, and is a 2020 Guggenheim Fellow. Hopinka is currently an assistant professor of Film and Electronic Arts at Bard College.

Dessane Lopez Cassell, "Poetry That Pulls at the Seams of Colonial Power and Memory," Hyperallergic, October 16, 2020.