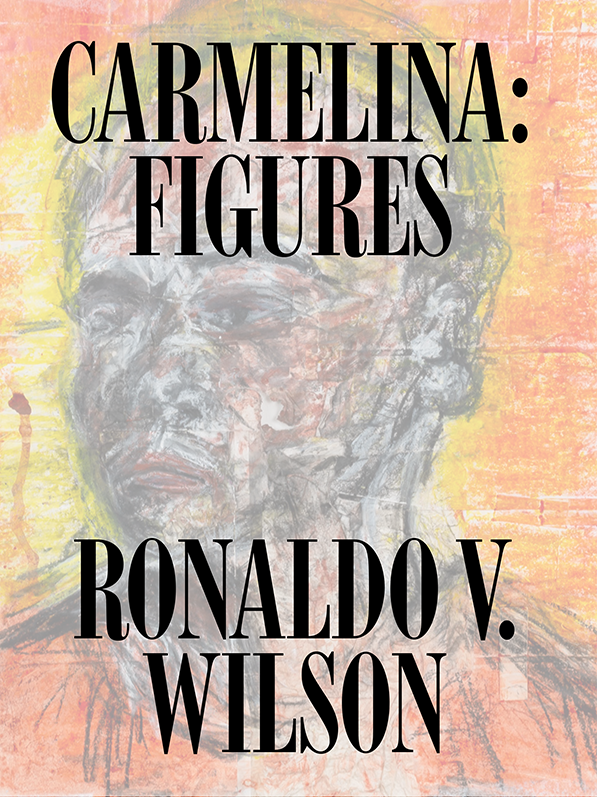 Ronaldo V. Wilson’s Carmelina: Figures excavates the territory between memory, nation, and embodiment, exploring place as a discipline of the body and an extension of the hand. Through poems, photographs, drawings, records of performance, and home movies recorded in Guam, Tennessee, and the Subic Bay between 1962 and 1979, Wilson reckons with familial heritage, diaspora, and legacies of militarism.

The book pays homage to Wilson’s mother, Carmelina, who served for most of her working life as a certified nursing assistant at Florin Convalescent, an assisted living facility in South Sacramento, California. A glut of signals and media recovers Carmelina’s vivid and urgent experience of exile from the Philippines to marry Wilson’s father—a Black American soldier—being disowned, and before that, of her parents’ assassinations during the Japanese Occupation. Through a visual logic of repetition and reenactment that works to unmoor sensory expectation and narrative logic, Wilson renders her figure as trace, melody against paper, drawing within song, mixed media, dance, and through improvised, masked, and recorded performances in the Berkshires, MA; Long Island, NY; Emeryville, CA; and Boulder, CO. Carmelina: Figures is a book of the Psoas, ice, smudge, and light.

To experience Ronaldo Wilson’s work is to give in to performance, to the experience of performance. The photographs, drawings, and words in Carmelina: Figures invite, indeed demand us to look, to listen, to meditate. Images and words are traces of themselves, a self-looking at itself. Echo-graphics of glimpses and glyphs that deconstruct. Follow the muse, Wilson’s mother Carmelina. Her movements, her gestures, her form—they are the shape of this book.
—Lucy Mae San Pablo Burns, Associate Professor, Asian American Studies, University of California, Los Angeles

A multisensory meditation on diasporic exile, a study in the afterlives of disinheritance, and an ode to a migrant mother who makes her mark. Wilson transports us through an intricate scaffolding of snapshots, text, sketches, and performance that coalesce into an intergenerational assemblage of feeling. Memory accumulates through archival fragments and scenes that are repeated, adapted, and annotated. In fields of double exposure, the presence of otherworldly alter egos tells of monstrous pain and radical awareness. Ultimately, the power of gesture breaks through restraints of lineage: outstretched arms, reaching out for the release into form that enacts, marks, smudges. In the quiet of the outside, Wilson teaches us to listen in anticipation of the extraordinary.
—Iyko Day, Associate Professor, English and Critical Social Thought, Mount Holyoke College

Ronaldo Wilson’s Carmelina: Figures offers a subtle and energetic portrait of a deeply layered relationship between son and mother, bleeding beyond the margins of gender conformity, and haunted by histories of militarism and the collective search for joy in the face of past, and future, death. Movement and gesture are revealed as forms of inherited truth; elusively rendered through raw drawings and sinuous photographs, the body’s memories become the artist’s richest memorial substance.
—Jennifer A. González, Professor, History of Art and Visual Culture, University of California, Santa Cruz

The extraordinary Carmelina: Figures is a performance-book that possesses the reader in delicate, meditative delirium. It embodies what it speaks of, the crosscurrents of a migrant book that moves from medium to medium, place to place, to address multiple, unstable identities and affiliations—quantic, it changes just by being observed. (This is also a portrait built of love.) I know not too many people who could sustain such an expressive power charge across all that media. But then, if it is true the volcanic Ronaldo V. Wilson contains multitudes, it is also the case that there is no other artist quite like him.
—Cyriaco Lopes, Artist and Associate Professor, Photography, John Jay College, CUNY

Ronaldo V. Wilson, PhD, is the author of Narrative of the Life of the Brown Boy and the White Man (University of Pittsburgh Press, 2008), winner of the Cave Canem Prize; and Poems of the Black Object (Futurepoem, 2009), winner of the Thom Gunn Award for Gay Poetry and the Asian American Literary Award in Poetry. His latest books are Farther Traveler: Poetry, Prose (Counterpath Press, 2014), finalist for a Thom Gunn Award for Gay Poetry; Lucy 72 (1913 Press, 2018); and two forthcoming books Carmelina, Figures (Wendy’s Subway, 2021), and a book of stories, Virgil Kills (Nightboat Books, 2022). Co-founder of the Black Took Collective, Wilson is, too, a mixed media artist, dancer, and performer. He has performed in multiple venues, including the Pulitzer Arts Foundation, UC Riverside’s Artsblock, Georgetown’s Lannan Center, the Atlantic Center for the Arts, Louisiana State University’s Digital Media Center Theater, Southern Exposure Gallery, and Casa Victoria Ocampo in Buenos Aires. Wilson is a recipient of fellowships from The Robert Rauschenberg Foundation, Cave Canem, the Djerassi Resident Artists Program, the Ford Foundation, Kundiman, MacDowell, the National Research Council, the Provincetown Fine Arts Work Center, the Center for Art and Thought (CA+T), and Yaddo. He is a Professor of Creative Writing and Literature at the University of California, Santa Cruz, serves on the core faculty of the Creative Critical PhD Program, and is a principal faculty member of CRES (Critical Race and Ethnic Studies).

"Fractions of Ourselves in the Timespan of the University: Ronaldo V. Wilson and jaamil olawale kosoko in Conversation," Critical Correspondance, September 6, 2022