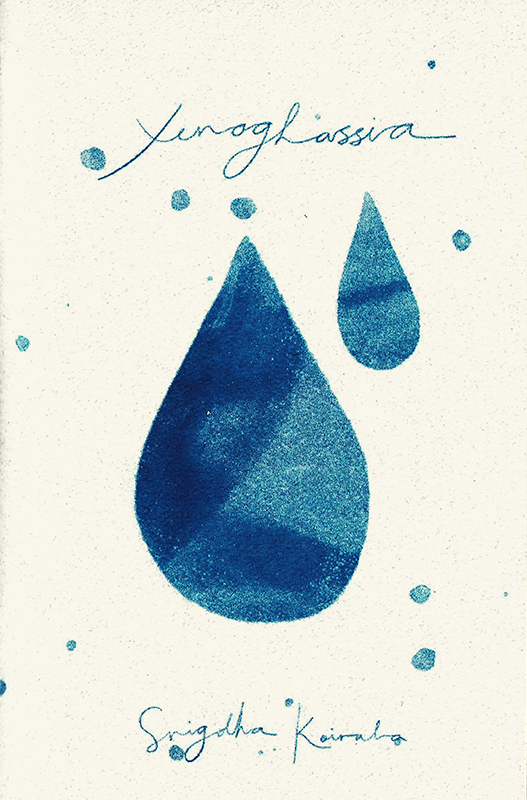 Xenoglossia is concerned with breaking apart and reworking the English language—in order to speak, and let speak, the waters around us. Through its investigation of the plural and severed (via routes of colonization and migration) lyric-I, its insistence on the language and voice of water, and its explorations of mining, translating, and traversing tongues, the book asks (after the poet Myung Mi Kim) and attempts to answer the question “What is English now?” How do we say what we must in a language mired with histories of colonialism? How do we pull forth the assertions, declarations, pleas, and moments from behind and between its crevices?

Xenoglossia returns me to the geological theory that all of Kathmandu, Nepal was once a primordial lake, which drained over millennia to clear ground for civilization’s intricate desires as they manifest in language, memory, and the art that flows between these. Koirala’s poems ask us to swim through bodies of water—lakes, rivers, oceans—and to consider how diasporic citizens embody the wetness of ecologies in speech and act, through gentle and persuasive forms lapping at themes of loss, grief, and displacement. The work of water, in Koirala’s vision, is iterative—it appears as fog, as ice, as rain, as flood—and interventionist, just as the poems here are, as they interrupt the force of forgetting and insist, drop by drop, on wearing away at the pressures of monolingual erasure.
—Divya Victor

Snigdha Koirala is a poet and writer based in New York City. Her works have appeared in Glass, Wildness, Gutter, and elsewhere. She is a graduate student at NYU’s Centre for Experimental Humanities, where, amongst other things, she explores the sedimentation of history and violence in the English language. This is her first chapbook.